Madeleine’s note: There are few better ways to get to know someone than by working at their side. Amy remains one of the strongest and most talented people I have ever met (she is at left in the image, I am next to her: with black hair, no less!). I was blown away by this post, which she was inspired to write 20 years after our time working together. I am moved and fascinated by how little I have changed since those days, and how powerfully certain people and interactions can shape us. Enjoy, and definitely check out her artwork as well.

This is a brave post. If you’re squeamish about blood or the magic of women or the power of accepting the physical, then you may wish to pass. But if today you felt a moment of powerlessness, or your own lack of bravery or a body disconnect, then I encourage you to read on. Maybe there’s something here for you.

Around 1995-96 I worked for 6 or 7 months in a small garment factory for a woman named Madeleine Shaw. A young entrepreneur with a mind for social and environmental change and what I still believe to be a f***-ing strong business plan, I think of her as the first woman who showed me the power of the feminine. We sewed tiger striped fur coats and sheer blouses for her teeny storefront, generated patterns and garment samples for young fashion start-ups who didn’t have factories of their own, produced mountains of velvet berets for Ooh La La Hat Company (this is how I still know the average head is 22″ around), and we made thousands of washable menstrual pads for Madeleine’s then-fledgling company, Lunapads International. (It was just “Lunapads” then. It wasn’t international yet, but soon would be).

Again, that’s washable menstrual pads.  As in, menstrual pads. That. You. Wash. As in, look, here is the blood you deal with. And wash. And care for. Remember, this is brave stuff, so you either have to lose the squirminess and all that BS you’ve been carrying around about what it means to be female and make the choice to continue reading, or not.

Okay, for those of you who are still here, read more story.

I have personally cut out hundreds of pads with an industrial cutting machine. I have prepared snap tape. I have measured rick rack. I have folded wings and nestled pads into perfect little packages. And I have sold washable menstrual pads to women who were at first skeptical and embarrassed, or even initially disgusted at the idea of using a product that wasn’t akin to a disposable bandage each month. And I, too, have used and washed them, for somewhere around eighteen years. But this post isn’t about pads. It’s about the passage of time, because in that 6 or 7 months working with Madeleine, I learned a lot about women and their bodies, and I learned a bit about feminism and eco-feminism, and I learned a hell of a lot more about myself, even if I didn’t realize it until nearly 20 years later when I’m looking at my little girl and realizing I have about 5 years left before I need to usher her into womanhood with reverence and bravery and strength.

And this has me thinking about Madeleine. And my mother. And my daughter. And my three sisters. And every other woman I’ve come into contact with who holds a story about menarche, or childbirth, or loss. And therefore, I am thinking about every woman.

I am thinking about every girl’s story. 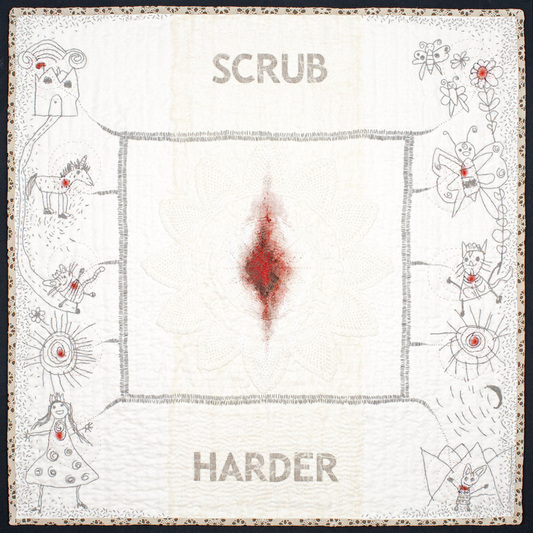 ​Brave stuff, right? Ask women about menarche and many of the same themes will emerge: confusion, shame, naiveté, disappointment. My neighbor recalled riding her bike around and around the block, skipping back into the house all afternoon to change her underwear every 10 minutes, not understanding why she kept crapping her pants. She told me this story when she was in her 40’s. I was 12 and hired to babysit her children that summer. We were crouched in her walk-in closet, admiring brand new kittens in a box when she looked me in the eye and said, “You do know what hole babies come out of, don’t you? Because nobody explained it to me when I was your age.” I nodded numbly and then she told me the Bicycle Story, and then she slipped her heels on, and then she waved goodbye, and then she backed out of the driveway, and then I flicked through the channels until I found the Smurfs, and then I poured cold cereal for her kids and plopped into the armchair with a sweating glass of Crystal Light.

For how many women is menarche treated as a non-event? A quick Google for “First Moon Party” will give you an eye-full of a pendulum that has swung in the other direction recently (and while hilarious, much of it is degrading in its own farcicality). This isn’t to say I didn’t spend a hell of a lot of time in my 20’s being really mad at my mother for not jumping up and celebrating that morning when I was 11 and told her my own suspicions about what was happening to my body. She’d only asked, “Are you sure?” But I’d seen a grimace. I’d heard, “I don’t believe you.” What I realize now is that she was completely unprepared. She had a new baby. She was exhausted. That look on her face was exasperation or fear, not disgust. She had it in her to give me the tools she’d been given by the grandmother who’d raised her, and that was it: soak in cold water, scrub harder, and the stains will go away. With enough detergent, enough lemon juice, enough sunlight, eventually, all stains will go away. All burdens will go away.

But some stains re-emerge like ghosts years later. And doesn’t scrubbing at anything that hard eventually disintegrate the most fragile layers?

I don’t see myself as a feminist, but I am “not a feminist” in the same way that I am “not a quilter.” I have a voice in the same way that I have a skill, and both beg to be used. Still, to create this artwork, to put myself out there like this, is terrifying. But to not create this work terrifies me even more, because it is as authentic and accepting as I can possibly be, as brave as I’ve ever been.

Even braver than the day I walked into Madeleine’s small factory on my lunchbreak, looking for a job because the woman I’d been working for had bounced 9 of my paychecks in 2 years. I was maybe 25 and to say my sense of self worth was diminished would imply that some vast amount of self worth had existed in the first place. Madeleine taught strength by embracing the very core of the physical self first. Then maybe worry about what is pretty — the occasional red manicure is a good place to start. A beautiful suit is another. The fact that I landed in her presence when I did has never been lost on me, even if I was just there for a short time. I still consider her factory as the place I healed before taking the next big step. And perhaps it’s because I’m poised to take the next big steps that I’m thinking about Madeleine. Or maybe it’s because I never really stopped thinking of her as a huge influence in my life even though so much time has passed.

And despite all the years away from that pad-strewn cutting table, she and the women she works with still blow me away. Everything from providing washable menstrual pads for girls in Africa so they can attend school during menses (Pads4Girls), to literally creating a celebratory day for young girls in order to invite them graciously into womanhood (G Day), and now G is for Goddess, a celebration of the divine feminine (for all those grown women who really wanted to participate in G Day). And so much more. So, yes. Re-think the definition of “Women’s Work.” There are women out there doing this. And it’s important.

About five years ago, the neighbor with the Bicycle Story killed herself. The children I babysat were grown, she had long since divorced, moved away from my neighborhood and so had I. But she is among the women I still hold close to my heart, having shared something as uneventful as a shame-filled story in a closet, reaching toward a box full of mewling, mother-licked kittens during one of the summers of my own awakening. She was a window into my future, a mother figure, an omen: Remember this much,you’ve just got to prepare your girl.  What else in her life, I sometimes wonder, was she woefully unprepared for? In writing this, I miss her.

I found this link (below) to Dominique Christina’s poetry while poking around on the Lunapads Blog. I burst into tears the first time I watched, because it’s so powerful, so poignant, and so raw. Watch it. Imagine this is your fierce mother arming you with language and bravery. We all have the ability to change the tools history has handed us and to graciously accept the tools others offer instead. More often, we just need to learn how hone what we already have inside.

These Girl Stories are important. I’m listening, constantly. I will listen to you. There is sisterhood through story, through art. Through bravery.

And none of it is pretty, but all of it is beautiful.

*Update, 2/2016:
Madeleine Shaw of Lunapads has recently had a fabulous interview posted on the site Mamalode. To read about the amazing 7-figure success of Lunapads and the woman behind G-Day for Girls, check out the link. She’s a force of nature, that one.

If you want to read more about this and/or similar work, please check out the following posts:
Alterations girl.
Write a letter to your mother.
Box of mystery.
In the deep well of series work.